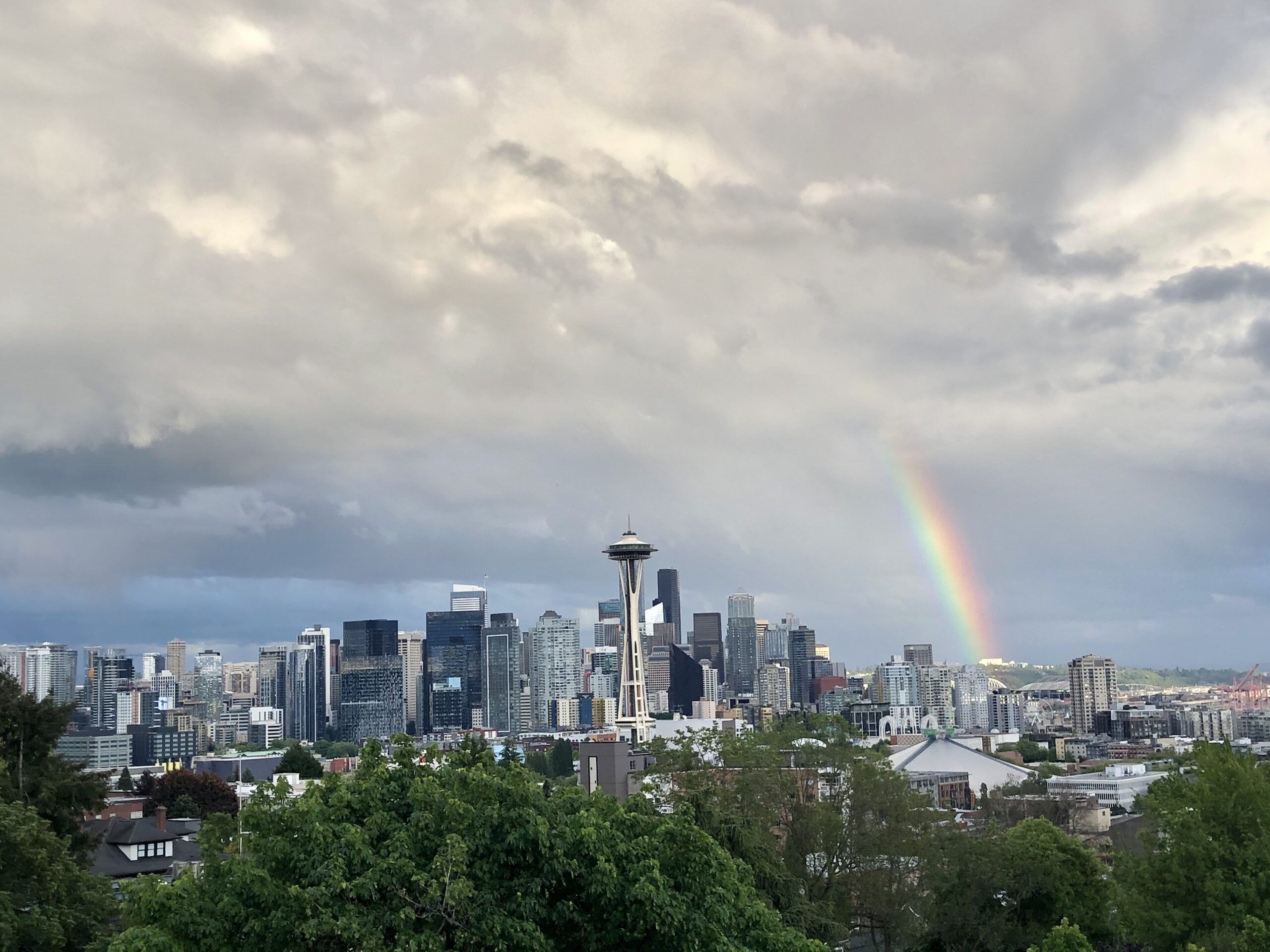 Where do we go to catch the light during these dark, winter months?  We asked Companis Workers and staff to send in photos that document a moment in time when light caught their eye and raised their spirits. From giant bubbles to meditation, we received an array of images that do just that!

Companis Worker Sharon Salyer is volunteering  with North Helpline on communications. Here, she captures the light reflecting off the water and through the rainbow-laced bubbles. “Being at the waterfront in Edmonds really is one of my favorite happy places,” she says.

Companis Communications Manager Erin Hennessey took this photo in Seattle’s Pioneer Square on the way to a video shoot for Biennial ‘21. “It was a dark day but there was a momentary sun break that made this old building gleam.”

Cherry Johnson is volunteering at Seattle First Baptist Church as its retreat coordinator. She likes to go to Seattle’s Volunteer Park “on a rainy or cold day and visit the conservatory.” This Victorian-style greenhouse is modeled on London’s Crystal Palace.

Mike Stevens, who likes to swim year round, volunteers at ChildStrive on its donor database. This is a photo of his outdoor public pool in Edmonds. “It’s been great to get outside in the natural light in a comfortable 81 degree pool when the weather’s getting colder. Rain’s not an issue once you’re in the pool since you’re already wet!”

Rishabh Jain volunteers at ChildStrive doing data analysis. Here he is in the North Cascades hiking Carne Mountain which is considered “challenging yet rewarding.” Behind him are the brilliant gold colors of the Western larch.

Gary Davis, Companis Executive Director, captured this image as he jumped into his car. “The morning frost on my windshield made such beautiful feathery patterns!”

Greg Scully is consulting with Esther’s Place in Everett, working on a strategic plan. He says, “My light therapy balm includes going outside.” This photo was taken from his deck. “The sky is huge, the colors are stunning, and I simply breathe in the light for a few minutes.”

Jennifer Wing, Companis Associate Executive Director of Programs, went on a fall camping trip along the Pacific Crest Trail. This spot is near Ridge Lake. “Fall and winter are the seasons when I can enjoy sunrises like this because they happen at a reasonable hour! This beauty happened a little before 7 AM.”

Timothy O’Brien is a longtime Companis Worker who has had multiple placements, including Full Life Care where he was a helper in its computer lab. Timothy says, “Meditation is only one way of connecting to the internal elements that can lead to a sense of light. Prayer, music, art, literature, and other quiet processes can also lead us to the light.”